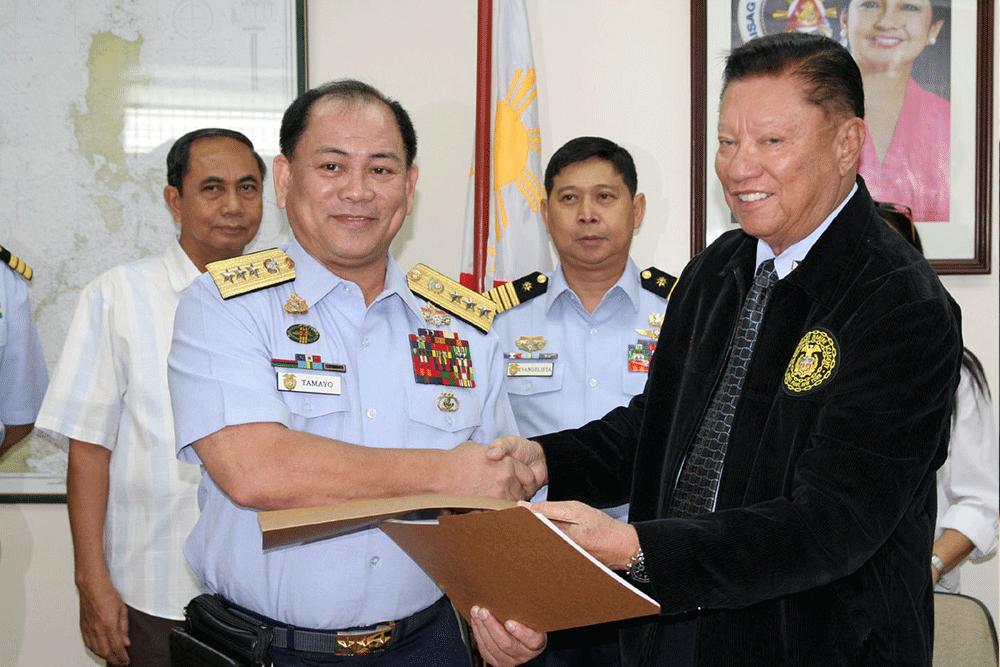 As Commandant of the Philippine Coast Guard from 12 June 2008 to 22 April 2011 ADMIRAL WILFREDO D. TAMAYO PCG exhibited an exemplary dedication to his sworn duty as he carried out efficiently and effectively his immense duties and responsibilities. Endowed with high sense of responsibility, professional competence, and technical expertise, ADMIRAL TAMAYO successfully steered the Philippine Coast Guard towards the enactment of Republic Act 9993, otherwise known as the Philippine Coast Guard Law of 2009, and the awarding of Quality Management System (QMSyiso 9001:2008 Certification to the Coast Guard Action Center. The PCG is the second Coast Guard in the world to be awarded such certification. Imbued with administrative and operational expertise, ADMIRAL TAMAYO effectively led five (5) Major Support Commands, ten (10) Districts fifty-five (55) Stations, three (3) Sub-stations and two hundred seven (207) Detachments towards the virtual attainment of the President's Zero Casualty Program and relatedly, the SOTC's Zero Maritime Accident Program.

Per instruction of His Excellency President Benigno Simeon C. Aquino IlI during the on- slough of typhoon Basyang last 14 July 2010 for the PCG to study and develop procedures in notifying or recalling fishermen during severe weather conditions or typhoons, the PCG thru the assistance of the DOTC crafted a Memorandum of Agreement (MOA) and held a series of interagency meetings and workshops which led to the approval and signing of said MOA essential to harmonizing and integrating the efforts of 14 departments and agencies to enhance the safety of fishermen.

The PCG significantly improved the overall operational efficiency of 556 lighthouses to 92%, thus continuing to effectively guide mariners and fishermen safely to their destinations.

During the height of typhoon Basyang, last 13 and 14 July 2010, the PCG successfully averted great danger to the coastal populace and the marine environment thru the efficient supervision and safe handling of salvage operations on the grounded LPG Carrier MT Deborah Uno in Mariveles, Bataan. The PCG also successfully conducted oil spill clean-up operations at Petron Depot in Rosario, Cavite, as well as coal spill clean-up resulting from the grounding of Barge Gold Trans 306 in Nasugbu, Batangas, thus protecting the nearby coastlines and marine resources from serious destruction and safeguarding the livelihood of local fishermen.

During the rage of typhoon Juan last November 2010, the PCG successfully conducted oil spill containment and clean-up operations for some 100,000 liters of bunker oil reported to have spilled from MV Nam Yang 8, thus preventing further damage in the coastal areas of Pagudpud, Ilocos Norte.

The PCG has matured into a world-class maritime safety agency, whose competence to perform search and rescue, marine environmental protection and vessel safety inspections on foreign ships have been regarded above par by no less than the International Maritime Organization in their post audit report after the country underwent the Voluntary IM0 Member State Audit Scheme.

The PCG was recognized internationally when it apprehended international pirates after 3 vessels were taken forcibly by pirates in international waters in two separate occasions. The pirated vessels were recovered intact and turned over to the owners. No less than the Regional Cooperation Agreement on Combating Piracy and Armed Robbery against Ships in Asia (RECAAP) Information Sharing Center (ISC) based in Singapore, commended the PCG.

The PCG confiscated a total of 94 firearms, to include the 50 high-powered firearms (Israeli-type Galil SSI-VI, cal. 5.56A-1) from the MV UFUK which was jointly apprehended in Mariveles, Bataan by the PCG and the Bureau of Customs (BUCUS).

Thru improved CG K9 capability, high-grade cocaine was recovered from several residents in the coastal municipalities of Eastern Samar which accounted for Php 362,500,000.00. Seventy-two and a half (72 1/2) brick packages of cocaine (weighing 1 kg. each) believed to have been dumped off the waters of Samar by the crew of a Chinese-registered fishing vessel FV King Yue were recovered. The crew allegedly disposed of the cocaine shipment after being tipped off that authorities were waiting for the arrival of the said fishing vessel in Hong Kong.

During his tour of duty, the PCG apprehended a total of fifteen (15) foreign vessels involved in poach- ng in the different parts of the country together with the vessels' ninety (90) crew members/fishermen of different nationalities.

Admiral Tamayo has earlier established and served as the pioneer Commander of TF Sea Marshal which continues to serve as a strong deterrence against terrorism on board passenger ships.

Admiral Tamayo, with the support of the DOTC, initiated and/or further developed Coast Guard Bases Taguig, Romblon, Mactan, Laguindingan, Farola and Cavite. Admiral Tamayo further developed and ensured that more comprehensive support systems are extended down to the frontline units ashore and afloat such as the Coast Guard Stations, Detachments, OP CON units, and vessels and aircraft deployed in the operational areas.

Significant increases in the budgetary allocations respective units in terms of POL products, repair and utilities (R&U), and mandatory expenditures such as light and water, and communication services among others, have been rationalized.

Comprehensive and timely issuances of Personnel Clothing and Individual Equipment (PCIE) of uniformed personnel and related requirements of civilian employees resulted to greater efficiency and morale and welfare of personnel.

Equipment and equipage upgrade for specialized and highly-trained personnel of the DRG such as speedboats, inflatable rubber boats, dive equipment and major upgrade or rehabilitation of office/billeting quarters/ facilities for CG K9, SOG, FMIT, CG Medical/Dental, and CG Ready Force (CGRF) have been undertaken.

Strategic operational facilities such as the Headquarters Philippine Coast Guard (HPCG) Command/Action Center and respective District and Station Command/Action Centers Vessel Traffic Management System (VTMS) Centers in Manila, Batangas and Misamis Oriental, and the HPCG Boat Ramp, Slipway and Waterfront intended to support the launching/ deployment of Fast Boats/RHIB/RB/ amphibian vehicles' into the bay, rivers, lake, and other waterways have likewise been upgraded or constructed and manned 24/7.

More enhanced support to the Command's Gender and Development (GAD) program thru dedicated enlisted women barracks/ female officer’s quarters at the HPCG and in every CG District/Station, and in terms of their training, assignments, promotion, and health maintenance program have been provided.

During the tour of duty of Admiral Tamayo, the PCG significantly enhanced the maritime communications system through the PCG-Japan International Cooperation Agency (JICA) Communications Systems for Maritime Safety and Security Project and likewise upgraded the communications capability of all CG Stations and Detachments. In line with the Command's cost-saving measures, the repair of Coast Guard capital ships are directly referred to duly accredited shipyards Likewise, shore-power connections for ships berthed at the HPCG Wharf, CGRF Wharf, and SAR Vessels' Berthing Facility at Malacañang South Cebu Wharf were installed, thereby enabling the command to save some 30 million pesos every year.

To meet various mission requirements, the PCG significantly improved the operational readiness of surface and air assets through credible ships' and aircraft repair program based on well-established Deployment, Maintenance, Repair and Training (DMRT) Base or DMRT thereby maintaining the high state of readiness of PCG ships and aircraft.

The PCG has embarked on greater self-reliance program through in-house repair and training capability employing respective Maintenance and Repair Groups (MRG) of CGRF and CGAG, FMIT under the MSSC, МЕРСОМ Laboratory for water quality testing and/or the conduct of "fingerprinting" in cases of oil spills, Hazardous Noxious Substances (HNS) and other types of chemical spills, explosive substance detection; breeding/training of material dogs and introduction of the "ASPINS" (Asong Pinoy) in the CG K9 program; and the Human Resource Development (HRD) program of the Coast Guard Education and

Training Command (CGETC). The Command has likewise significantly improved medical and dental services for PCG personnel and dependents through decentralization and upgrading of medical and dental clinics/dispensaries in all Coast Guard Districts.

The Command recruited some 2,000 additional personnel and likewise initiated the PCG Cadetship Program through the conduct of MOA with the Philippine Merchant Marine Academy (PMMA). Under this pilot program of the PCG, 14 PCG cadets are now in their first year at the PMMA and the next batch of 20 new cadets have already been screened. Through this initiative of the command, the United States Coast Guard (USCG) has likewise welcomed PCG nomination of deserving Filipino cadet-candidates to the USCG Academy starting this school year.

These significant achievements have made a positive impact for the Philippine Coast Guard and the Department of Transportation and Communications which is in keeping with the finest tradition of the Coast Guard service.